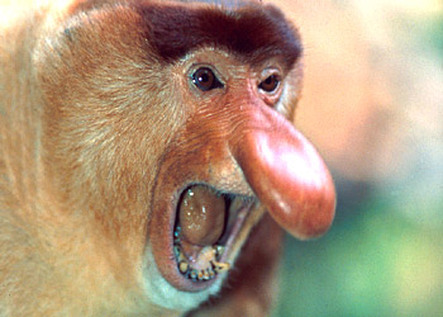 The Proboscis Monkey lives solely on the island of Borneo, which is located in Southeastern Asia. They tend to live in packs that range from about 9 to as high as 60 individuals. The Proboscis Monkey has an average life span of 13.5 years. They start to mate at 5 years and the period of pregnancy is about 5 and a half months.
The Proboscis Monkey males can weigh up to 50 pounds but females only reach about half that size. A quarter of the monkey's entire weight comes from the stomach. They need such a huge stomach because their stomach is divided up into various parts that are filled with cellulose digesting bacteria. This helps them digest leaves that may contain toxins. Leaves are their main source of food so this is very important.
Proboscis Monkeys are most commenly known for their huge noses. The noses are only a feature on males though. It gets red an inflamed when the males are provoked. The rest of the body is cream colored except for the redish-orange head and gray arms and legs.
Unfortunately, the Proboscis Monkey is endangered and is getting more so with each passing year. Over the past 36-40 years, the population of Proboscis Monkeys have decreased by over 50%. There are currently only 1,000 left in the wild, but about 5,000 in captivity.