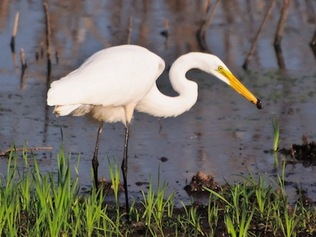 The Great Egret is found almost everywhere around the world except for the northern most parts of North America, Asia, Africa, and all of Antarctica  They are found near bodies of water that can be either fresh or salt water. They catch their prey by standing still over long periods of time until an animal that they can eat comes close enough that they can quickly throw out their long necks and grab up the prey with their razor sharp beaks. They typically eat various types of fish and occasionally eat small amphibians and reptiles.
The Great Egrets live in colonies with a mixture of other species of egrets and blue herons. The birds nest in trees where they will lay and incubate three too four eggs. Once the eggs hatch, the young egrets are very aggressive and will even kill the weakest f their siblings.
The Great  Egret are obviously all white, have a long yellow bill, and long black legs. They are about 3.3 feet tall and have a wingspan of 52-67 inches. They only weigh an average of 2.2 pounds.
The Great  Egret was close to being extinct during the 19th century but, now live all over the world and are of least concern of going extinct.